Key points from the budget:

1. The NHS was omitted completely from Osborne's speech, the Tories are hiding from their record on Health and Social care. All of the 'easy' efficiency savings have already been made, the Conservative plan represents a real threat to relied on services.

2. Osborne was bullish about his 'recovery' the average weekly wage in our region dropped from £485 to £479 last quarter he did keep repeating the words "long term economic plan" hoping that voters will believe the Tories actually have one.

3. Despite the talk about 'The North' there remains 75% bigger cuts in the North than the South and for every £25 spent on transport in the capital just £1 is spent in our region. I'm not convinced Osbourne could point to Northumberland on a map, it was a London-centric budget with transport infrastructure announcements for the South, this really was a desperate chancellor trying to shore up core support.

4. The measures announced on tax avoidance are blatant electioneering. We know who is paying for the Conservative election effort, they remain the party of tax avoiders. I don't trust what Cameron and Osborne say on tax avoidance if they did tackle it, too many of their friends would get caught out.

5. By all measures the austerity-only approach has failed. But Osborne continues to cut services not because it's right for the country but because that's the reason he came into politics. 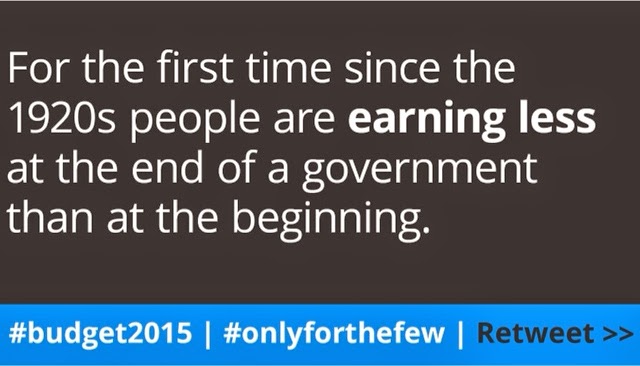