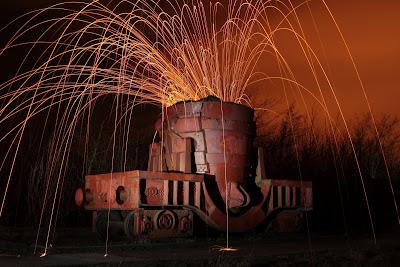 I am from Consett, a town famous for not very much at the minute, we have had our moments however. A few years ago Consett was famous for Phileas Fogg snacks. Some people even thought we had an airport thanks to this rather sarcastic TV ad circa 1995 which describes Consett as a cultural centre for Europe!

Before the 'crisp factory' there was a larger employer in the area; one which left its imprint on the landscape and the psyche of the local area: Consett Iron Company known as the Steelworks or just as 'The Company' started around 1840. It was an ideal location for making steel; there were and still are large coal seams in the area and some of the local rock is rich in iron ore. As the Steelworks developed however steel was being produced on such a huge scale much of the resources came from outside the region. What Consett had was a quality product, an experienced workforce and a huge facility. Steel from Consett was the stuff of the late industrial revolution. It was used to build the High level Bridge in Newcastle, the Blackpool tower and even sections of the Syndey Harbour Bridge.

I have very little personal experience of the Steelworks; it closed in 1980 when I was 2 years old My Dad and around 4500 other steel workers were made redundant. There was now a steel town that had been making steel since 1840 with its heart ripped out. I have always assumed that when people talked about how good life was at 'The Company' that it was a standard case of looking back through rose tinted spectacles at a bygone golden age. There were objections to some dubious working practices. My Dad's Dad was a strong and hardworking man: Family say I am like him if I work hard or if I am being stubborn and unmoving in my views; he like many others, left the mines to work at the steel works and bemoaned the lack of solidarity between workers when compared to the pit. This lack of solidarity originated in a system of rules laid down by management that you would think would be objectionable to a unionised workforce. For example if one man was off sick, his pay was docked and shared out between the workers who were shorthanded on that shift. It was also a dangerous place to work, men died, one fell into a smelting pot, or more often sustained horrific injury. Some of the work like filling the hoppers with coke and ore was repetitive back breaking labour. but the Steelworks offered a living wage and job security for several generations.

If I had been born 20 years earlier I would have worked at the Steelworks. I have some aptitude for science so if I had shown that at school then it is possible that I could have worked in the labs, the steel works had its own R&D department. I like to think I would have been grafting with the lads but a career in metallurgy may have been more likely. I have now come round to the idea that despite the pollution and the famed red dust, life was better in the Consett area before the steel works closed. I am a child of the 80s not the 60s and as life turns out I am now a lecturer at Newcastle College. I had taken my own job security for granted but having supported union members through redundancy yet again this summer, I understand how job security being taken away impacts on your life.

The steel works has left an indelible mark on the area both on the land and on the people. The perimeter is 9 miles around and the land is a now wide open space. There has been little investment into the site in my lifetime until recently there is now a McDonalds, a large Tescos and a Starbucks. Project Genesis which talked of developing the whole site, was often discussed in council meetings between the years when I was 8 and 11 - there was talk of theme parks, ski slopes and all sorts of exciting things. I know this, not because of any extensive research I have done but because I was there. Not in the meetings with my Mam; who was a Chair of Planning at Derwentside District Council, but because I was hiding and seeking in the corridors of power, mucking about on the staircase with my twin brother and, if we got exceptionally bored, we would listen in to what was being said in the chamber like a pair of secret agents. We were never neglected; Mam assumed we were colouring in, in the members room: Good Times.

On the 9th of July 1980, Steelworkers went to hand in a 20,000 signature petition to 10 Downing street but no minister form the Thatcher Government would come and meet them. Its not surprising really the attitude of the government towards the steelworkers was one of utter contempt. Tory journalist Auberon Waugh sums this up in the Spectator in 1979, just 6 months before the steelworks closed

"I have been making forays into the North East to taunt the 'workers' there... there would be plenty of work in the North East if anyone thought they would do it properly... Politicians should visit the region to remind themselves of the immovable stupidity envy and hatred"

Despicable writing, but Tory attitudes really changed? With cuts imposed on Surrey Council at approximately £4 per head of population and cuts to councils in the North East at around 50 times that level. They may not come out and speak publicly in the same terms as they did in the 1980s but actions such as this, speak as loud as words.

There are similarities between the situation at the steelworks and the situation at the crisp factory. Derwent Valley foods is now KP snacks and they are now moving production. In a depressing sort of symmetry some workers who lost jobs when the steelworks shut and and then found work at Phileas Fogg, are again facing redundancy. I am not in any way suggesting that fewer than 100 people being made redundant causes the same widespread hardship and misery as 4500 redundancies and the closure of a towns main employer, but the individuals made redundant will feel just as rejected, dejected and frankly, ejected from a workplace to which they have given several years of work.

One striking similarity between the closure of the crisp factory and the steelworks is the level of profit involved. In each month leading up to the closure of the steelworks the Consett site made profits of around £900 000. Last year Intersnack which owns the KP brand made profits of around £2.4M. The banner carried by those steelworkers to London on the 9th of July 1980 could be loaned to KP workers 35 years later, it would need no modification; it simply read: 'In the black, faced with the sack'

People of Consett of all ages feel something about the steelworks, for some it is a vast empty space to walk your dog, for some it is a topic they are sick of hearing about in the workingmens club, for some it is a symbol of a bygone industrial age but for some it is a memory; of a time when hard work paid well,when earnings were enough to keep a family, and when plans could be made for the future because employment was not fixed term, it was permanent.
Posted by Unknown at 18:15

Great post Liam. I am told that both my parents and both grandfathers all lost their jobs, my mother was pregnant with me at the time.