For me, It's been a year of two halves. Before May 5th and after May 5th.

Before the election was the busiest year ever, balancing the work as Labours parliamentary candidate in the Hexham constituency with full time work and family life. We fought a good but tough campaign; knocking on doors, listening to concerns of voters fighting a very difficult election in what has been Tory seat for a very long time. I worked with some of the most committed activists in the country, we heard from voters who were worried about rising prices, static wages, job security and a lack of transport and infrastructure investment in our local area. 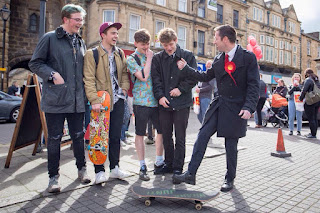 These concerns are real and they remain, but ultimately most voters decided that we needed continuity in government. Candidates and Labour supporters woke up on May 6th to learn that despite times being very tough especially for those on low incomes, the majority of people who voted did not think that a Labour government was the answer to the difficulties facing the country.

The issues on which the general election was fought have not gone away. I am ashamed to live in a country where foodbanks are not an emergency measure. People, often those in work, have to rely on the charity of others in order to eat. Benefit delays are an accepted part of the system, leaving people unable to afford to feed themselves and their families.

Charities are providing services that were once provided by local councils, while the conservative government, now with a mandate to cut restrict funding to local councils to a point where it is difficult to provide even statutory services. The ideological position of cutting local government combined with low levels of investment is set to continue will mean the UK economy will continue in the same way for the next few years with low wages, and falling living standards.

The lack of infrastructure investment has come into sharp focus. Floods have ruined Christmas and New Year for too many families. The coalition government appointed a climate change sceptic as environment secretary, while he was in office the budget for climate change adaptations such as flood defences were cut by 40%. Land use regulations which include planting to prevent run off, were also scrapped. The government should apologise for these these two decisions and reverse them both this year.

Labour has a new leader and he needs time to settle into the role. Large sections of media and conservative head office are trying to do hatchet job at such an early stage in the electoral cycle. Jeremy has a pretty hard job, leading the Party in opposing the worst excesses of the conservative only government in the next few years and convincing voters that there is an alternative to more years of Tory rule.

I said, after the hectic pace of the general election campaign I would take a break from politics. In the second half 2015 I have done exactly that. I didn't take too much of an active role in the leadership election but I was pleased that Jeremy won and he has my full support. I haven't even been staying up to watch Question Time on a Thursday night and my twitter feed and blog has been a bit neglected. Instead in my spare time I have been cycling, playing guitar, doing voluntary work and spending time with my family.

There is now four and a half years to the next general election. There are local elections which are increasingly important because despite councils' having far less funds to provide services than ever, power is being devolved to local regions.

The fight for a fairer society continues and that fight has to become a local one; in our workplaces, for fair wages and in our communities, to try and safeguard relied on services. In 2016 I remain optimistic about politics. The Labour Party and the Trade Union movement are still a drivers for positive change in society.

All the best for the coming year.
Posted by Unknown at 18:04