Today at the Tory Party conference we have seen more complacency from George Osborne, saying 'job done' when most people are still worse off than they were in 2010. He also said the 'economy is fixed' but national debt has grown since 2010 to a staggering £75bn. 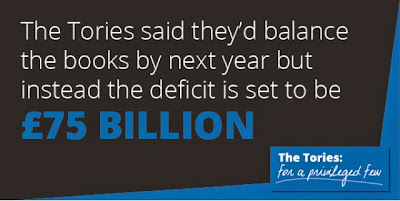 There were 2 contrasting announcements: Firstly, the 4% of richest households will be able to pass more money onto their offspring (if they have any) because inheritance tax is being scrapped. I can see why the thought of a 'Death Tax' might be unpopular but it affects so few estates, now is not the time for more measures to help the few and not the many.

On the other side of the coin there are 10 million households on low to middle incomes claiming tax credits or some sort of in work benefits. These are the people who will be hit hardest by the Chancellor's announcements today. In-work families with children will lose as much as £490 a year in child benefit and tax credits.

The Tories are again standing up for the wrong people, offering nothing to families who work hard to provide a decent standard of living for their children, but instead implementing changes, which only serve to build an economy that is skewed towards those at the very top.

Their conference slogan needs an added strap line: Conservatives: 'Securing a Better Future' ...for themselves and their donors since 1832.