I have been blogging mainly about politics, a field in which I have no formal qualification, I dont feel that this is a major disadvantage. I hope that politics is never an area that becomes completely overrun by politics graduates. I also hope that more science graduates find a way into politics, a more logical, pragmatic and scientific approach would be most welcome in government. I also find it strange that most of the MPs that sit on the Science and Technology select committee do not have Science degrees. A quick wikipedia search throws up more history degrees than BSc's. It is slightly patronising when MPs make speeches about how Science is vital to our future and urge students to study more STEM subjects (Science, Technology, Engineering and Maths) when they have no experience of what scientific study actually entails. Vince Cable made such a speech and claims to have started out as a scientist;


"I’m one of few MPs to have at least started a science degree – well, it began as natural science and ended up as economics"

Well I stuck with natural science; Biology to be exact and I love it. I am still fascinated by almost every aspect of the subject and I feel privileged to be a Biology Lecturer. So today I'm going to blog about something I really do have some understanding of: Succession, not succession in the House of Lords or Royal family, but ecological succession which can be described as the gradual increase of biodiversity over time until a climax community is reached. Succession just happens, its is an absolute certainty, a bit like a biological version of chaos theory in physics.

Succession happens in the absence of human interference, it is a slow process by which communities of organisms become less dominated by single species, more diverse and more ecologically stable. The most often cited example of a climax community is a rainforest but an example closer to home is mature deciduous woodland. Most woods these days are managed by humans and so are not true climax communities (these managed climax communities are known as plagioclimaxes). One of the environmental science lecturers at work introduces sucession by telling her classes that a few thousand years ago woodland coverage in the UK was so extensive that it would be possible for a red squirrel to get from John O' Groats to Lands End without ever touching the ground. If a squirrel did make such a trip I wonder if it would stop off in Pont wood for a bit of foraging? 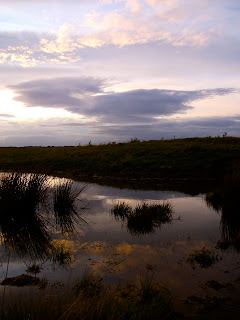 The Pont Valley1 is under threat. It is a beautiful valley the North East of England which lies between three former pit villages Leadgate, Medomsley and Dipton. You may have read in previous blog posts (Down the Woods and The Coal-ition) that UK Coal want to start a surface mine (opencast) in the Pont valley, this area comprises both coniferous and deciduous woodland and one less common type of habitat; ponds. Ponds are forgotten havens of biodiversity. Hedgerows got a bit of publicity a few years back, people have camped in trees to save them from road expansion but to my knowledge there has never been a Save Our Ponds campaign. In the planning application for opencast UK Coal said that they would relocate several mature ponds to a location in the valley that does not lie over a coal seam. Recovery would take decades. It would be impossible for plant species and invertebrate populations to be relocated effectively and the gradual increase in biodiversity over time would need to start all over again this is known as secondary succession.

The genetic diversity of the already rare great crested newt would be particularly threatened by being moved to a newly constructed pond. Relocation would, in effect, act as a 'genetic bottleneck' This term is used to described what happens when a population must restart from a small number of individuals. There are only a few alleles in the small number of individuals that would moved. They would be the only ones that could breed in the new habitat. It would be impossible to move anywhere near the whole population: newts send a lot of time literally buried in silt and even under turf. Needless to say surface mining would wipe out these individuals along with any unique alleles which will never be passed on and disappear from the gene pool forever. The relocated population would be more closely related to each-other and more vulnerable to disease and extinction.

There are no cheetahs in the Pont valley. They are however an excellent example of an organism with very low genetic diversity. If you compare their DNA then every cheetah on this planet is as closely related as two human siblings. Amazingly they are so genetically similar that all cheetahs will accept skin grafts from all other cheetahs. It is thought that the population was reduced around
10 000 years ago3 Damage to genetic diversity is a problem that never really goes away.

I really love Biology, Genetics, Biodiversity and the Pont Valley.
The Coal-lition must be stopped. Coal is our heritage not out future.

A blog post with footnotes. Only a Bede's boy...

Old School! Normally I would have used Harvard referencing. Footnotes are now the norm even in scientific journals and they are a bit more blog friendly.

A quick wikipedia search also reveals no science degrees amongst the news reporters on BBC 24 or Newsnight. I completely agree with you about MPs. That unhampered by the 'facts', they are making decisions about renewables and climate warming would be laughable if it were not so serious. 73% of Tory MPs do not want any more spending or legislation on carbon reduction.

Planning application refused at appeal, a victory for local activism.